Python comes with a bunch of standard modules. My favorites are shutil, glob, datetime, time, os (operating system), re (regular expressions) and webbrowser. The standard library is loaded.

This post will teach you some Python history, show how to install pandas, and help you troubleshoot problems if it’s not working. You’ll find Windows and Linux commands for venv setup (recommended). With pip, you’ll feel like Neo when installing new modules. Any skill is at your fingertips. It’s like learning kung fu. There’s probably a library for that!

Before We Start, You Should Know

Back in 2018 when I first used pip, the Python community was still transitioning from Python 2 to 3. At the time, the pip installer was not shipping with all Python versions in use. Python 2 has officially been sunset.

Python comes with pip now, no setup is required.

According to the pip installation documentation: “pip is already installed if you are using Python 2 >=2.7.9 or Python 3 >=3.4 downloaded from python.org or if you are working in a Virtual Environment created by virtualenv or pyvenv.”

Enter This in Your Terminal

Pandas is a super useful library for wrangling spreadsheet data, AKA “tabular” data. If successful, you should see activity that looks similar to the below screenshot, where I am installing openpyxl, an additional Python Excel library you’ll likely want. You are good to go! This is the part where you get to feel like Neo! See Installing Python Modules in the Python Documentation for more detailed instructions. 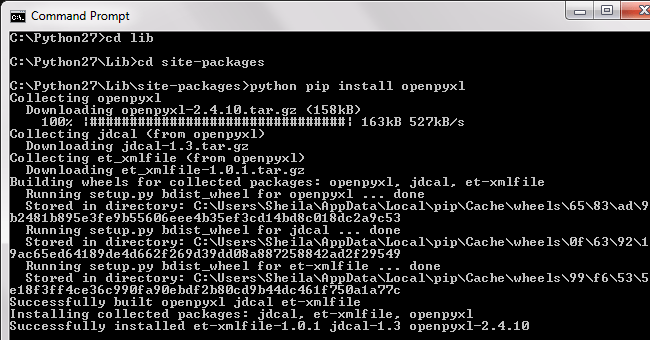 Psst! To view all your installed libraries, enter:

Congrats on figuring out how to install packages with pip, have fun! 😀

Did that work? If not, here are some things to consider.

Ensure Python can run in any directory on Windows.

To check if you can run Python anywhere: open command prompt, type python and hit enter. Type quit() to exit the interpreter, then use the cd command to change the directory and type python again. If the python interpreter runs in a few different file path locations, you’re good to go. If this doesn’t work, you may need to do the following:

You should follow best practice and create a virtual environment before installing libraries. venv or virtualenv will help you out. To create with venv:

After your environment is created, activate it with the first command below, then install a library on Ubuntu Linux:

If you’re interested in installing pip on Linux, try here. For Mac, try here. Windows, Mac and Linux sometimes use different prefixes (e.g. python, py, python3) to run a python script. Which leads me to my next point:

Getting the prefix right can be tricky.

In the install command, the prefix is a reference to your Python executable. You may just need to alter your prefix to call it correctly. Here are some to try in place of “python”. Observe what happens when you run these command variations. Good luck!

Confused yet? It’s ok, I was too when I first sorted through all of this.

The rest of this post may be useful to you if you are:

Got library version conflict issues? If so, you may want to try the pip dependency resolver, newly released by the pip team.

Here’s an example of installing a library and using pip’s “dependency resolver” flag:

How to Enable the pip Installer

Assumes Python is already installed. If you’re running Windows 10, I found it easy to install Python from the Windows store.

Download the get-pip.py file. Go to the link, right click the page and “Save As” a .py file to download. Then place the file where you want to access it. I placed mine in C:\Python27\Lib\site-packages

If you are not sure where your site-packages folder is, type python -m site into command prompt for file path ideas.

You should see some activity in command prompt that shows installation/updating of “setup” and “wheel”. When it finishes, you have installed pip.

Type into command prompt at the same location:

This should install the Requests module into your Python libraries. Requests is an http module which is highly regarded almost universally by the Python community.

Thanks for reading! Check out these other posts with pip installed library examples: